Had a good chuckle, they are so pathetic...

Had a good chuckle, they are so pathetic...

I find it funny that the channel simply use a fan art of Soviet Heavy Tank in the first Red Alert game, slap a German flag on it, and call it a day, as a thumbnail representing a tank to be use against Russian.

EDIT - I finally found the source : It’s not Red Alert fan art, but, aside from obvious attempt to make it look dystopian, it’s actually something even more beautiful. 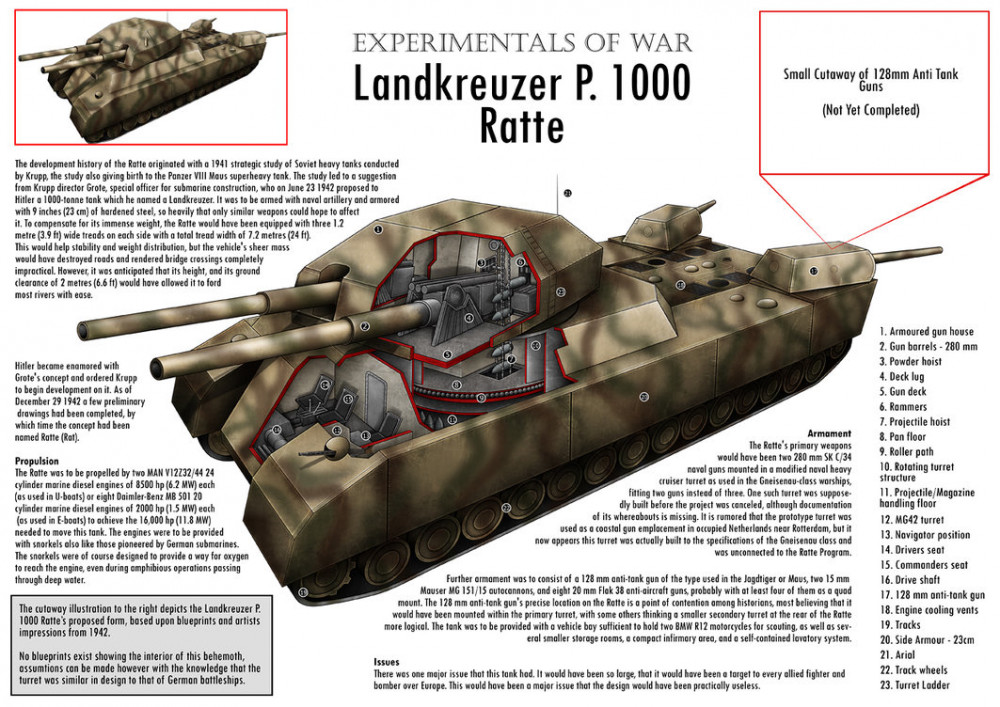 What is it with Nazis and giants tanks?

Fun fact is that basically every country with major armored forces had designs of some unpractical monstrosities, including USSR, and most build at least some prototypes, but it’s a more wehraboo thing, you don’t ever seem them drooling over TOG 2 or even T28, yet the drool over everything with iron cross on it. Also that’s how you always check someone who had no even theoretical knowledge about warfare - even much smaller Maus was completely unusable because of its mass (188 tons for Maus and Ratte would wigh at least 1000 tons).

Not even Hitler really wanted to build that thing.

Yeah, though it was not even this impressive (except the quadruple tracks, that looked cool) with its mass merely 60 tons, which is less than for example Abrams which later versions weight 70+ tons (Abrams is actually the heaviest mass produced tank used in actual combat). Most modern MBT’s tend to weight 60-70 tons.

Overcompensating for something probably

Fascists always want supersized weapons. The Japanese built the Yamato, the largest battleship in history. So big that it was impractical and basically useless :P

Funnily enough, the uselessness of battleships were proven by none other than Japanese themselves, at Pearl Harbor first and Kuantan sealed the deal. Thing is, IJN was torn by two loosely defined factions, one led by Yonai and Yamamoto which preferred modern approach and the other were old concrete. What sealed the deal with Yamato was Yonai actually supporting the construction as part of more complicated political deal behind it, but he got tricked and eventually ousted from office. What they did succeeded was to build absolutely iconic ship which memory unfortunately and incredibly fan flames of the militarism in Japan.

Didn’t it use wooden struts because they didn’t have proper quality metal?

It was actually very impressive feat of engineering, especially considering the sorry state of japanese industry at the time.

Guess so. I just find it odd, you know?

I look forward to seeing Tesla tanks setting on fire and breaking down.

Ah, so following the traditions of the old Nazi tanks

Such has a venerable history in German engineering

They’re maybe worth it against poorly equipped insurgents with total air dominance to cover them. But in conventional war these are just extremely high value targets. Just look at Russia. They’re mostly not using their most modern equipment like Armatas at all, because they’re too valuable to lose.

They tried to do this in WW2 with the Tiger which was overengineered and they lost badly to the T34 simply because the latter was more reliable, simpler to use and maintain, more robust and mass produced in huge numbers.

This strategy never works against a peer enemy. Sure you may be able to roll over some insurgents with AK47s and flip flops with your high tech hardware, but that is not reflective of the performance in a real conflict.

Even now the majority of the heavy lifting in Ukraine on the Ukrainian side is done by old but reliable Soviet equipment, not by the hodge podge of western crap that they got which breaks down too easy and needs a ton of support.

Tiger really is the perfect comparison. But ofc Westerners never learned the lesson of the Tiger, because people are still creaming themselves about that thing and laughing about supposedly cheap, crappy T34s.

Not just on their side, on the Russians too. Just look at this list of Russian artillery pieces. Almost all of it is Soviet designed. Granted, some very late Soviet era, but still. D-30 howitzers are all over the place in Ukraine and that thing has been around since the 60s and afaik is still their main field artillery. Every man of fighting age in Russia has been trained on it, every military mechanic worked on it, etc. This shit just works, is easy to maintain and mass produce.

Is the M777 better 1on1? Yeah sure, but it costs >$4mio, because it’s an air droppable super light weight, titanium clad what ever the fuck piece of high tech with gps guided missles, a digital fire-control system, etc. Good for accurately blasting farmers with AKs out of caves? Probably, but not for mass war, under mass artillery barrages for firing hundreds of shells per day.

An AMG Mercedes G-class is definitely a higher quality machine than a 90s Hilux, but those are still the work horses all over the world in the toughest conditions doing what they were made for.

Just imagine the logistical nightmare Ukraine is facing with these dozens of random as complex weapons systems they’ve been blessed. One more expensive than the other, hardly anyone’s trained on anything, maintenance is hard, replacement hard to come by, munitions not interoperable, etc.

It isn’t a real thing. Nobody builds nor wants to build double barrel tanks. Those were already tested and found to be extremely inefficient. This YouTube channel is just click baiting Gamers.

Even if there was a point to making a superweapon instead of something you can reliably mass-produce, why would anyone focus on developing a fucking tank as a Wunderwaffe in this day and age anyway? If Ukrainian shitshow is showing something militarily, it’s that the god of war remains the same and correcting it’s fire with reconnaissance drones makes it hella efficient.

Let me guess, another Turkish Channel sold to the SBU?

That is interesting. Wonder what’s happening

Do they not know what missiles are? Remember all the wank about how Abrams tank could survive RPG-7 (older ones at least)? Yeah well at least one was destroyed in Iraq by a Tochka-U missile. You know, those old, Soviet ones that are getting phased out in Russian military and Ukraine uses to bomb civillains?

Is this mammoth tank from RA series?

The mammoths were Soviet units IIRC.

And also Ukrainian, in open RA.

Lmao if Musk is involved it’s pretty much a scam.