I don’t know what kind of engagement to expect, but I made a post encouraging Raddle users to come here. It appeared to be an exclusively leftist space and be an active forum.

Having styled this post as an AMA, I may be unprepared for some of their questions. I haven’t been on here very long, and may be fielding questions that are better directed to Lemmy devs or long-time users. I am happy to x-post questions and answers to their platform on your behalves

Shoutout to @Amorphous@lemmygrad.ml for giving me the idea in the chapo thread

@dessalines@lemmygrad.ml The thread is hostile, and this question is probably rhetorical. Nonetheless: u/LucyParsonsRocks asks

Hi eagerwhiteness, I have a question. Why is the technology behind lemmy so horrible? When chapo got banned the site was slow as a doorknob all day. Is dessalines an awful programmer, or is it some kind of anti-tankie conspiracy on behalf of the FBI to make the site look bad?

Side note, before I even started lemmy (and also had the idea for an activitypub / federated reddit), I thought about contributing to postmill. I opened up an issue about adding working torrent magnet links(to make file-sharing more friendly), and the ticket was immediately closed. The dev told me feature-requests are not allowed, as it causes them more work.

I get that of course, as an open source dev nearly all the work you’re asked to do is free labor, but not even allowing any feature requests from the community, (and the code being php), were signs that we really needed a better alternative.

We’re getting a huge influx of users, and we need to re-work the caching / DB, which is what I’m working on now. And yes I am an awful programmer.

You, @nutomic@lemmygrad.ml and the Communist Party of China are the only entities officially approved to consensually fuck my ass

Very nice of you, I just hope my wife doesnt see this :eyes:

I haven’t looked at your code, but it’s worth pointing out that Postmill is basic as shit and the UI is awful because the dev doesn’t care and there are almost no Postmill instances other than Raddle because the dev is a chud who doesn’t take feature requests. (The dev set up their own instance which was down as of checking… I found exactly one Postmill instance that was not raddle which is up in 2020)

DOS is faster than Windows 10 but that doesn’t mean DOS is better than Windows 10, and also Lemmy is still under development. I just checked the Github and you haven’t even reached a 1.0 release yet. I mean version numbers are entirely arbitrary, but the clear implication to me of being below a 1.0 release is that it’s obviously still under development. Suboptimal performance for software that’s in development isn’t grounds to say “lemmy is horrible.”

Postmill is an older and more well-established piece of software that aims to do far less than Lemmy. Of course it will be better tuned for performance.

It’s just anticommunist backbiting and concern trolling and nobody on this forum can expect good-faith engagement from Raddle.

follow up: “That would be great, comrade. While you’re at it, can you also ask them why lemmy’s database queries take 40ms? Postmill’s only take 2ms. This proved to be an unmitigated disaster when Lemmy got a little bit of traffic the other day and became unusable.”

We are taking care of the database situation, it will just take some time. Not that easy to handle thousands of new users flooding in all of a sudden (plus a ddos).

Anyway like I said in the other thread, it wont help anything engaging with these people because they obviously already made up their mind. And having more users just means more moderation and admin work for us, and less time coding on federation.

I guess I was hoping that others (outside of some of the assholes asking questions) might learn about Lemmy and check it out. You’re probably right though, I’m pretty certain these questions are rhetorical and after I’ve been downvoted enough, nobody would listen to me. Asking shit like, “yes, I have a question, why do you suck?”

Its really not a good idea to engage with them, even the reddit anarchist community hates them. They’re a very specific sect of post-left european lifestyle anarchists that harasses any socialists off the site.

Lmao I didn’t even know that there was infighting between different sects of online anarchists.

Landing page, code of conduct on the right column:

I had no time to open posts against i.e globalresearch but as soon as I want to do that, I will have no doubt in which community to post it.

EDIT: I made a test post here so that if one wants to discuss it they can find the place.

@dessalines@lemmygrad.ml They seem to have questions directly for you. I did not know you are an internet celebrity. User “suma” asks: “So if lemmy is a place for communists of all types, why is a fascist the person behind it, and why does he ban communists that take issue with homophobia?”

They definitely aren’t communists, and don’t allow them over at raddle. Here’s the person who runs that instance: https://theanarchistlibrary.org/library/ziq-tankies-and-the-left-unity-scam

They brigaded here posting a bunch of anti-stalin / anti-maduro articles, and are still angry about being banned. This would be equivalent to me brigading there posting a meme about emma goldman calling lenin a “shrewd asiatic” and then screaming about them hating asian people after a ban.

I cringed out of that SO fast

Before Stalin and Mao’s collectivization and industrialization, most peasants were largely self sufficient. They lived simple uncomplicated lives in harmony with nature; having no carbon footprint to speak of, most enjoyed relative autonomy from the state, practiced mutual aid with their neighbors, and only needed to work a few hours a week [1] to produce all the food they needed to survive. The progression of Soviet state capitalism quickly changed all this, and they now had to labor endlessly in grungy, polluted cities or on industrial battery-farms for the state or face being branded a “kulak” and exiled, imprisoned or killed.

Imagine defending the tsarist regime to own the tankies… :face with rolling eyes: The source they put doesn’t even mention the Russian late 19th / early 20th century peasants. It’s about peasants in the UK of the middle ages up to 1600. And that source doesn’t come to the conclusion that they only worked a few hours a week, it comes to the conclusion that they worked on less days. Direct quote from the source (emphasis mine):

Also, note how they don’t mention the conditions of the Russian proletariat in the cities (yes, it was already there before Stalin’s industrialization, go read a history book; I also remember reading a good article about it, but can’t find it anymore). They don’t mention the recurring famines. They don’t mention who the kulaks actually were — big land owners who were exploiting others’ labour. Something that, you know, someone who calls themselves anarchist should be against.

About industrialization… remember, all capitalist had united to destroy the first socialist state. Both by direct invasion, and by sanctions. So, it was “either we industrialize, or we are crushed”. Sure, the conditions may have been “grungy, polluted cities” for some time. But are they seriously arguing that Russia by, let’s say, the 50s, would have been better off being an semi-agrarian country?

Where did that person get their ideas about pre-revolution Russia? Disney movies? :face with raised eyebrow:

Good job poking holes, i didnt want to read that junk, but I was sure there would be some serious bullshit in the citations

They probably conflate pushing back against captalist propaganda as unconditional support for these figures.

I believe that that’s related somehow. Also look at the modlog from 10 months ago: 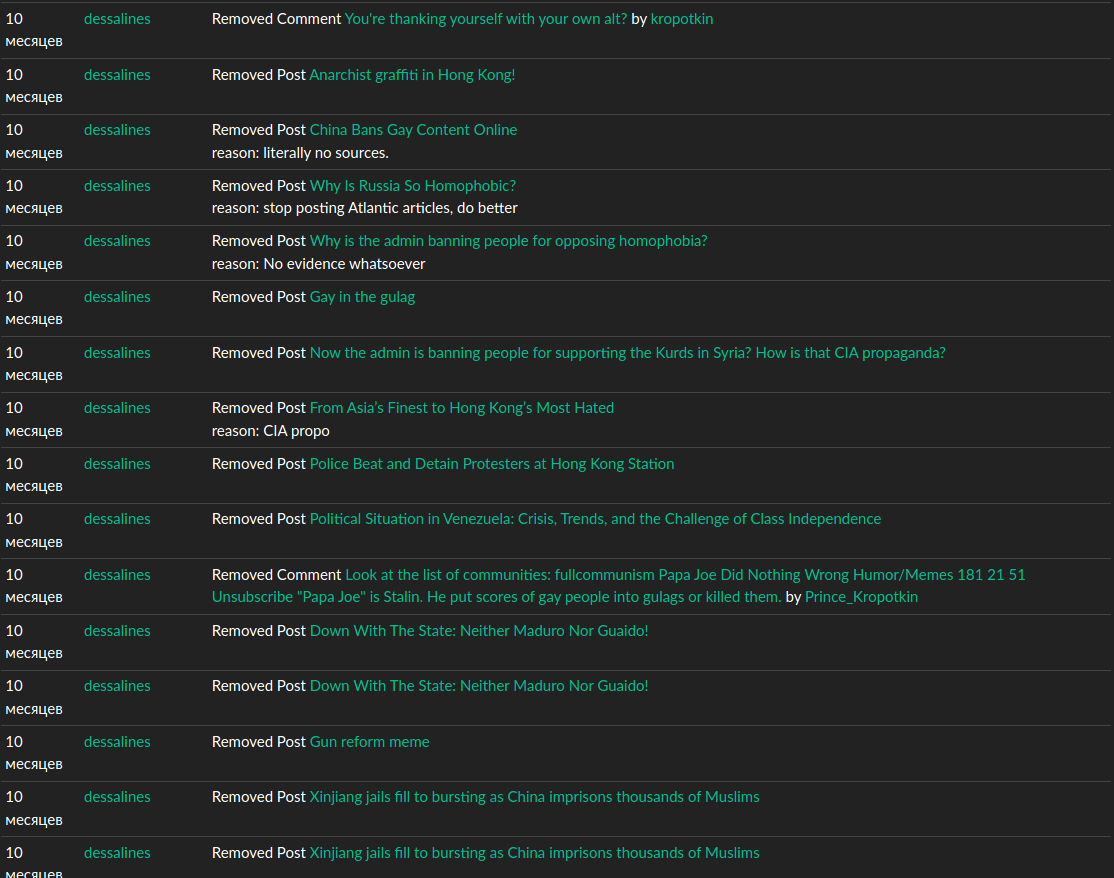 So, apparently some kind of anarchists (at least that’s what I assume from their usernames) were brigading the community, posting CIA propaganda against socialist states, you see.

Yup this is correct. In the early days of this instance, a bunch of them brigaded here posting anti-maduro, anti-stalin, pro-HK separatist memes. We banned them obviously, and they’re still mad about it.

Also please don’t do brigades over there, we just want nothing to do with them.

yes, this checks out

It’s run by post-left egoists and anti-civvers, both strains of which ideologies are anti-working-class (despite some egoists protestations to the contrary) and their special distinguishing feature is that they tolerate and encourage sectarian abuse. Hostility to anti-capitalist politics is a defining feature of Raddle.

For community-wide announcements, such as new subs, etc.