I invest in communism

image
yes i would like to see more
23
image

I invest in communism

@HashtagMarxStufftoGenZedong•He is out there
link
fedilink
7•20d

stalin chilling with the deer

aah, good ol’ Bellingcat Bob, forever obfuscating the path towards the left and muddying the waters around ANY topic that would usually require a basic ounce of nuance

more communists show up in your already left-leaning subreddit

i too will also have zero regrets once i’m done with this fucker, all in Fortnite: Battle Royale, of course

isnt he also in a part of the continent that’s famous for being incredibly hard to reach?

that’s Maoism, but sure, go on.

Anarchists seem to label you a ‘‘tankie redfash’’ or a ‘‘statist’’ whenever you disagree with them on their version of what socialism should look like. That’s common cult behavior. What do y’all think of my analysis?

but they have wholesome 100 helffcare, doe!!

absolute fucking word salad, sad to see yet another failure of the american education system walking around and posting their opinion online, where every normal, sane person can see it.

coming soon, to a rag near you: CHINA IS GENOCIDING GOLF COURSES!!

link
fedilink
@HashtagMarxStufftoShit Liberals Say•I doubt whoever made this is a champion of LGBTQ rights themselves.
link
fedilink
20•1M 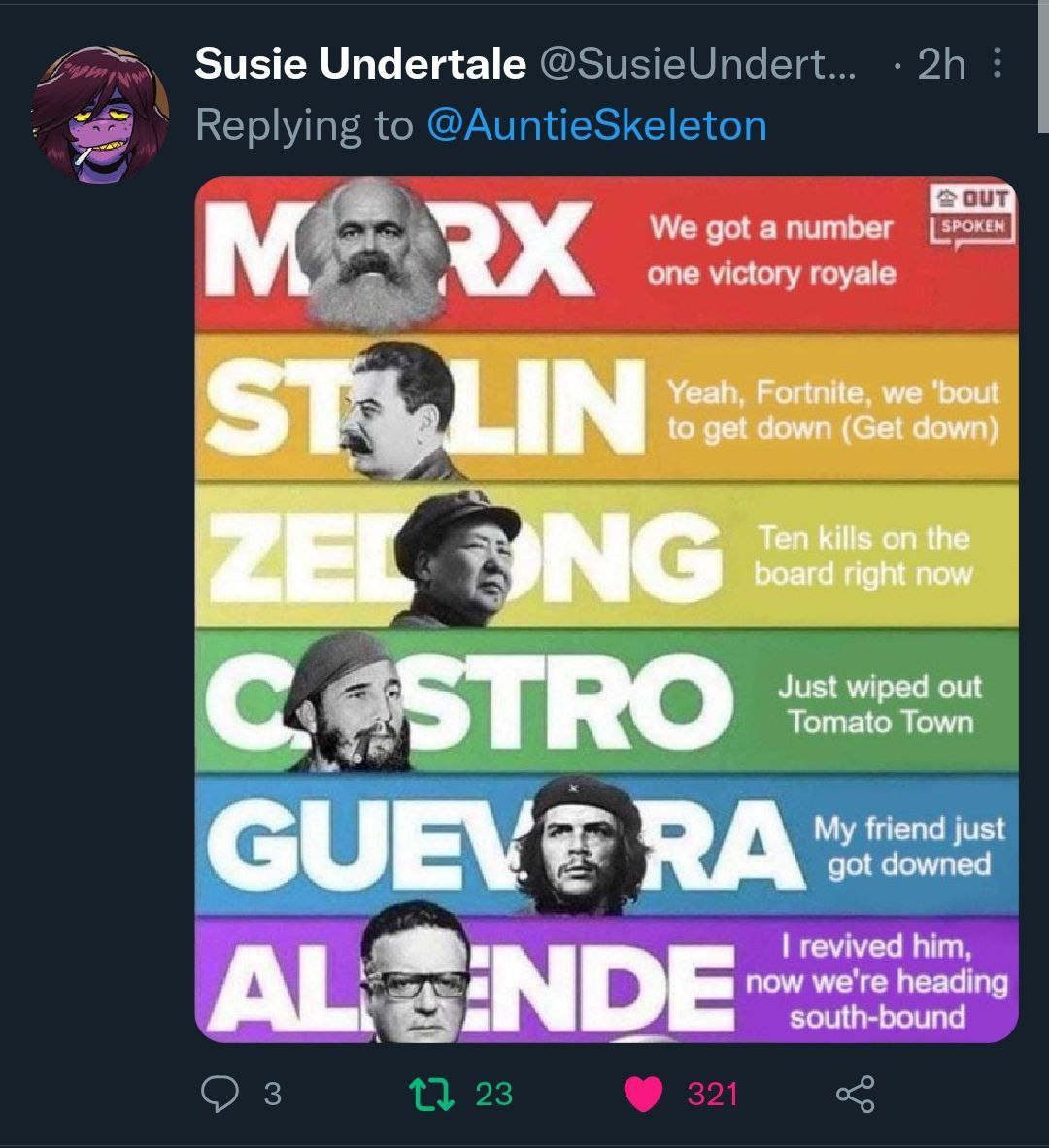 bit idea: becoming a scab just to fuck everything up.

do they function on some sort of dumb logic where things are better the more ‘‘radical’’ they are???

most movies by Miyazaki, the ‘‘anime was a mistake’’ guy, not the one that makes videogames

nononono, you are all getting him wrong, strawmaning his argument AND doing a whataboutism, sweaties.

look, im going to be entirely honest with ya, the first two seasons are literally part of the extremely small catalogue of good things netflix produced.

If you ever feel inclined to watch this show, make sure to not go beyond the second season, because the writers just went full stupid by the third one with the whole ridiculous not-trump insert helping the evil commies build a secret lab under the town mall for… reasons.

indeed, the one thing i can’t criticize about the game is it’s art direction.

The Outer Worlds is just… sad.

when i first played it i thought i was in for a critique of capitalism, in a dystopic scenario where it’s only the economic system that managed to colonize space.

Instead, i get a liberal ‘‘critique’’ of whatever the hell they consider to be ‘‘extremes’’, as the only times this game critiques capitalism is when the owners are so comically evil to such an irrealistic degree that they seem more like cartoon characters. In fact, i’d say the game spends more time shitting on anti-capitalists, than it ever does spend critiquing the system: The Iconoclasts a group of ‘‘anti-corporate revolutionaries’’ and their leader Graham Bryant, are painted as evil because they willingly allowed pirates kill the company’s bosses and their families living on the planet. And the only good ending they’re allowed to have is when you kill their leader and make them merge with the Epic socdem ‘‘we have healtchare and vacations’’ corporation next doors.

Felix Millstone, the recruitable Cargo-bay worker is constantly made fun of by both the game’s writers and the other characters for his anti-capitalists views. ‘‘He kicks things that need kicking, and we look the other way when he starts talking anti-corporate.’’ (dialogue from another one of your companions) and how the ‘‘good’’ ending mocks him for having hopes of an ‘‘awakening’’ among the colony that would spark a revolution as if it was an impossible fantasy that only children dream up.

Clyde Harlowe and his band of Outlaws who attack company freighters and ‘‘plot a revolution within the colony’’, are portrayed as murderous, evil and useful idiots that get used by corporations to attack their rival’s freighters.

Hell, this Both-sideism that the writers love is even present in the dilemma from the FIRST main quest of the game, where a group of deserters from a company town make their own little town with an alternative food source that doesnt rely on the company Cannery, but there’s only enough electricity for one place so you are forced to choose who dies. the only way to reach an ending where you don’t have to starve half the population to death is when you bring the deserters back into the Company town, where they become indentured servants that have to pay for their graves with their own money.

The mods said y'all cool now, so im posting my stuff here too

The mods said y'all cool now, so im posting my stuff here too

image
he is doing his best
13
image

external-link
i actually have no clue what the author of this was trying to say, i just know it sounds cool
4
external-link

Kneel for the rule

Kneel for the rule