There are more mosques in Xinjiang alone than in the EU. with sources

There are more mosques in Xinjiang alone than in the EU. with sources

Edit: I found data for more countries, included bulgaria in this edit (a whopping 1200).

Also note that many countries have no purpose built mosques, that is no building that is designated solely for being a mosques. Many have just one or two for their whole Muslim population. Some have no congregation centres for Muslims at all – for example Slovakia or Croatia (with Hungary heading this way as well).

Kept this to the EU + 2 countries (Switzerland and Norway, who are not members) because there is no actual statistics on this and I had to google everything myself. I also removed countries with less than 100 mosques from the list because they were statistically insignificant. Luxembourg for example has 6, Portugal has 16, Italy has 8 – by all accounts I could find.

Total number of mosques in Europe: around 10378 (I rounded up the statistically omitted data to 100 for this number)

We could also compare the number of worshippers in both places but I spent enough time on the numbers already so this will be very quick. There are 12 million Uyghurs in Xinjiang and I’ll assume they’re all Muslim. Meanwhile there are 25 million Muslims in the EU (https://www.bbvaopenmind.com/en/articles/muslims-in-europe-the-construction-of-a-problem/).

lmao the people from lemmy really don’t like facts huh.

The worst part is, many of these countries that condemn China don’t have a single mosque. This is a map of the countries that signed either of the two letters at the UN, the first condemned China and the second praised it. 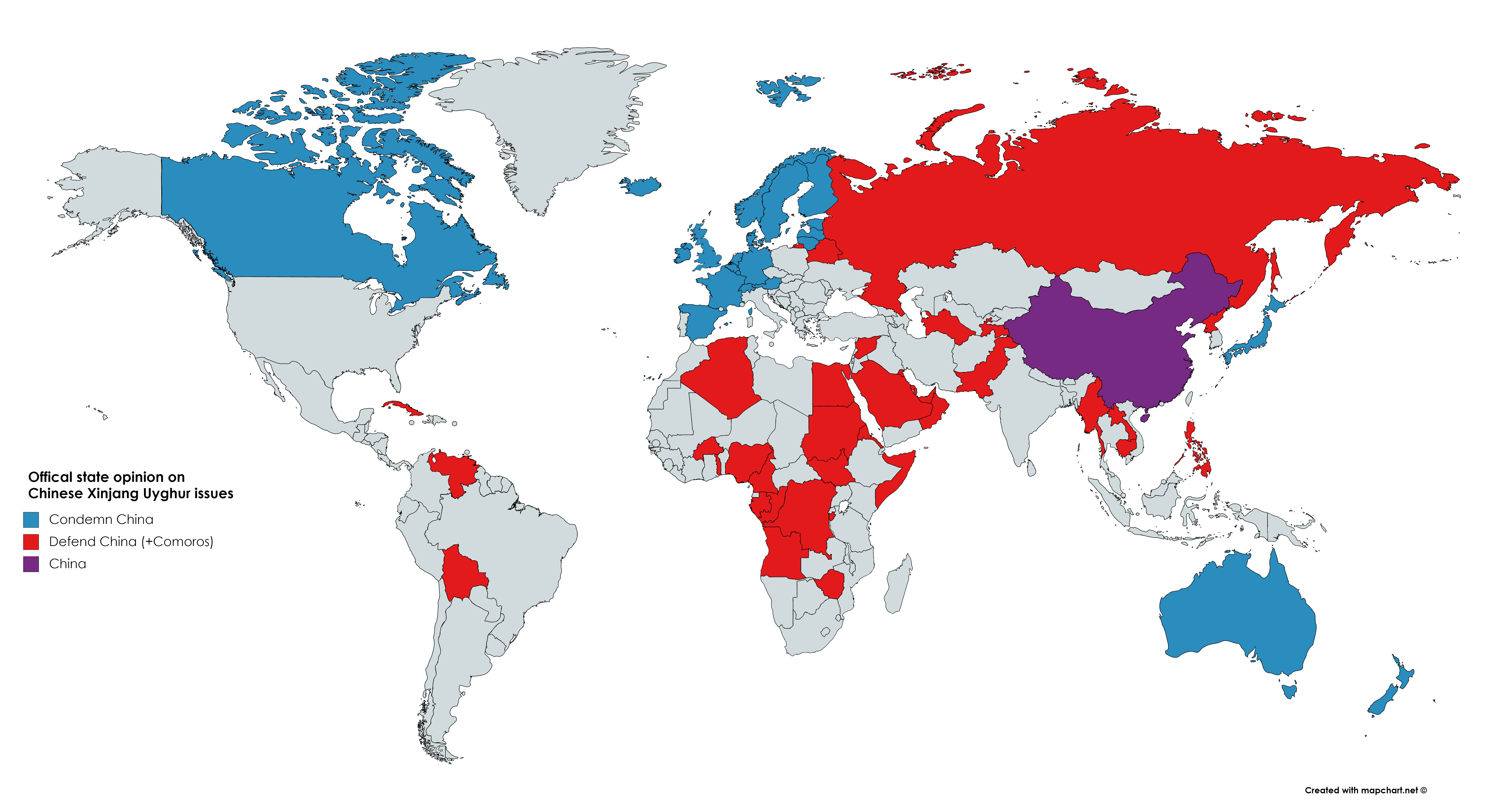 Iceland and the Baltic countries condemned China, yet have no purpose-built mosque in their country. Switzerland signed the first letter as well, has around 100 mosques, banned the construction of minarets prior to 2010 (despite the call to prayer already being illegal), and recently banned wearing any kind of veil or head covering in public under the guise of not letting poor Muslim women be forced to wear this very oppressive clothing.

Sweden, as you can see from the post above, has its own problems to sort out: out of 175 Muslim congregations polled, more than half said they had experience one or more attacks against their place of worship. These are very worrying numbers. I was completely unable to find any data about mosques in Norway, probably they don’t even know themselves how many they have… if any. Finland is doing okay, they have a total of 40 but just 2 purpose-built; the others serve as multipurpose facilities. For their population of self-identifying Muslims, that’s a ratio of 2 mosques per 1000. But we should have to see what these mosques are, because from what I found they were very small, mostly office buildings.

But why is there no data for Norway…?

While I was able to find figures for all countries (even those that had 0 mosques), Norway was the only country that didn’t return any result. Maybe searching in Norwegian one could find something, but trying various keywords in English did not get me anywhere. Regardless it’s highly doubtful Norwegian mosques would statistically influence the result, if they even exist.

A place for focusing on all things China - language, history, politics, etc.

3: No spreading disinfo or racism