Says the person who supported US imperialism in Venezuela and Bolivia

Says the person who supported US imperialism in Venezuela and Bolivia

US Places Sanctions on Cuba's Minister & Ministry of Interior

US Places Sanctions on Cuba's Minister & Ministry of Interior

Evo Morales on oxygen due to mild pneumonia brought on by COVID. People close to him say he’s doing well though…

Capitalism in Crisis: Economics and the Rise of Fascism w/ Richard Wolff

Capitalism in Crisis: Economics and the Rise of Fascism w/ Richard Wolff

The fascists definitely thought they’d get more help from those sympathetic within the state apparatus, but even then they just wouldn’t have been able to hold onto power. Trump just didn’t have the backing necessary to seize anything and the majority of the bourgeoise are still hesitant on going full fascist

The paralysis ends: Trump, fascism and the capitalist state

The paralysis ends: Trump, fascism and the capitalist state

Finally about to be cleansed from you filthy tankies!

Finally about to be cleansed from you filthy tankies!

He might want to, but he does not have the backing of the military or really many of the bourgeoisie. All he has is his fascistic base which wouldn’t be enough

Cuba Could be on the Brink of a Revolutionary COVID Vaccine, But US Sanctions Are Slowing It Down

Cuba Could be on the Brink of a Revolutionary COVID Vaccine, But US Sanctions Are Slowing It Down

Sorry for the potentially shitty Google translate, but I don’t have much time this morning to do one myself …

Why pharma giant Pfizer should not control the COVID vaccine

Why pharma giant Pfizer should not control the COVID vaccine

Tens of millions locked out of U.S. “democracy”

Tens of millions locked out of U.S. “democracy”

There are a few other news sources that tend to be spread around, but unfortunately none are as in-depth and cover so much like Grayzone (at least in the West). Telesur is incredible but I wish they’d do big analysis pieces like this. Qiao Collective is becoming one of my faves but they’re obviously very focused on China; the articles they have are sublime though

@savoytoleftsthetics•A while ago I made discord emojis of your favourite ML figures, feel free to use them for your discord as well.7•4M

I don’t have time right now to get really detailed, but basically united fronts are good and useful for specific actions. A party joining a coalition with liberals and potentially other “leftists” could be important for more mobilization, broader reach on some items, etc. It’s been incredibly useful in organizing anti-police actions across the US since George Floyd’s murder.

However, being completely dependent on these united fronts dilutes the party message if nothing is done about it, and could lead to further deradicalization. A party should use the fronts to further class consciousness if possible but not rely on them. An issue with CPUSA’s liberalization really coming in strong in the 1950s had part in their obsession with these sort of coalitions, where they were hesitant to do anything that could “challenge the masses.” Very clearly the wrong tactic.

Painting is “The Judgement of Karl Marx” by Huang Zhongyang

They do post some pretty good articles and are fairly consistent in being anti-imperialist and pro-AES from what I’ve seen.

I’ve been slacking on checking it the past week or two, but if you get on I can link some good people to follow. I don’t follow many as some like to post a lot and super busy timelines aren’t my thing. 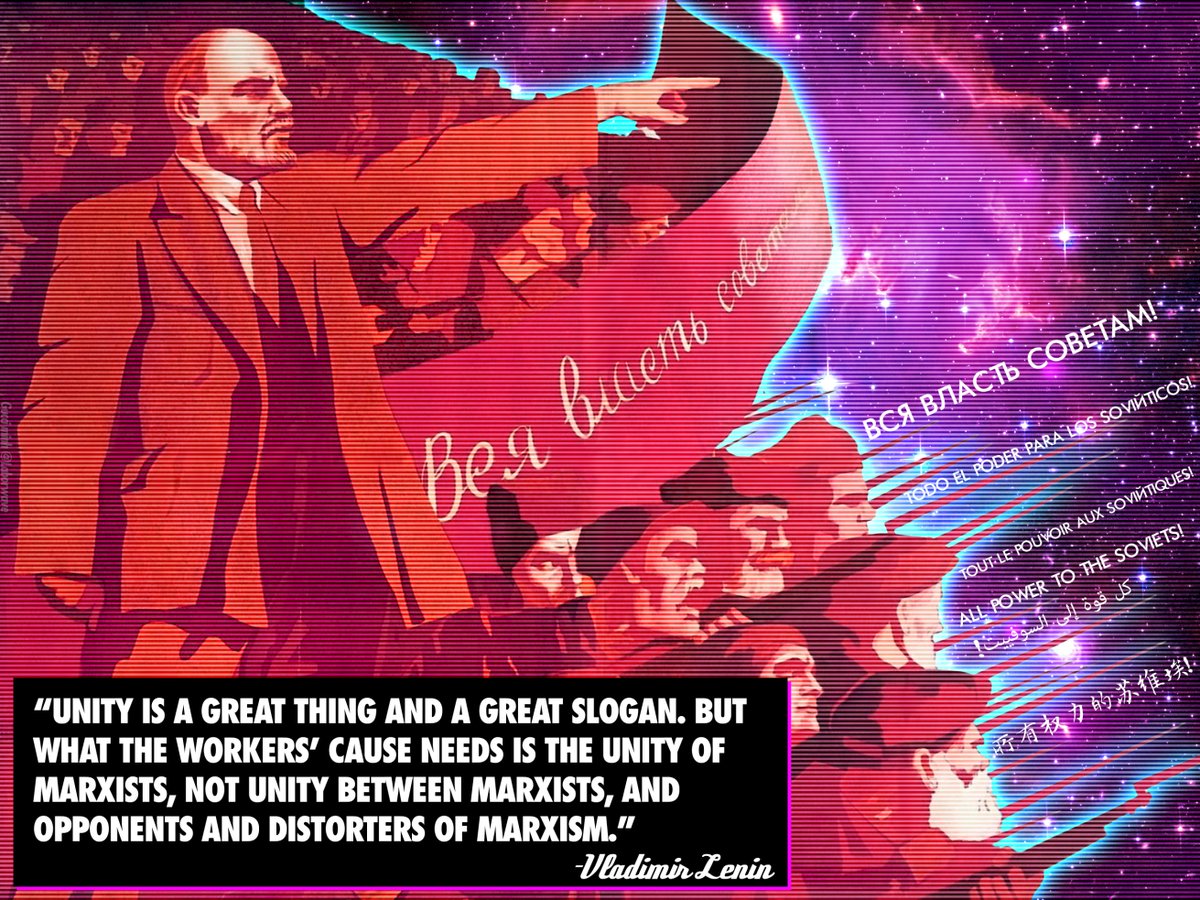 @savoytoleftistinfighting•Is it just me, or are more liberal ideas slowly making their way into /r/communism?8•5M

The biggest issue I see with jumping into the support of bourgeois picks is that no matter what you do, the revolutionary message is going to be coopted and distilled to appease the elite. Just take a look at Bernie, the perfect socdem. His constant push to getting M4A mainstream has amounted to nothing at the party level. The Democrats have just offered lip service to it with no intention to push for it. So now it’s strengthened the Democrats to make it seem like they care about M4A when it’s far from it.

The La Riva campaign is the best example of following a good line when it comes to electoralism in the US. It’s used as a tool to get further attention in a country where elections are seen as the be-all-end-all of political change, and spread a revolutionary platform amongst the masses. Plenty of comrades have joined PSL due to the election campaigns or have become aware of the party and been further radicalized. There’s no false hope of actually winning, it’s simply using elections to expose the system.

This specific twisting of Marx and Lenin’s words to suit revisionism is something that always bothers me. I’ve seen far too many “communists” use this false reasoning to try to rally others into voting for bourgeois parties.

Zero surprise but still peak cringe and shows that the Democrats do not stand for the people. The audacity to choose a cop running mate especially in the current climate.

There’s no strict age-limit for PSL, although minors would need parental permission in order to actually join (instead of just being a friend of the party, etc.). I would definitely recommend reaching out to your closest PSL branch and getting more information. You can ask for more info at https://pslweb.org/join or reach out directly on your branch’s social media. Showing up to a demo where they will be also works.

Liberals: NPR is unbiased! They do such a great job of just presenting the facts without all that media fluff

I feel sort of the opposite.

The US is the most powerful imperial country on Earth, its the literal belly of the beast. The amount of capital at its disposal is immense. It wouldn’t make much sense to do a “tactical retreat” as the PRC had to as the productive forces in the country are nowhere near the level they were post-revolution for China. There’s no need to build it up to meet peoples’ needs, no need to form a front against a hostile nation.

The wealth gap in the US is increasing; the “middle class” is shrinking to where the “lower class” is where most of these people end up. As this slow-burn crisis continues to expand and peoples’ material conditions further deteriorate, it becomes much easier for people to realize something is wrong. Education and radicalization is what will get the masses around the idea that the “American Dream” is all a farce.

Post-revolution, if the US were to follow the Chinese model, it would only end up empowering the already very powerful bourgeoisie, making the task of the vanguard so much more difficult. China started from even more feudal conditions than Russia; there really wasn’t a bourgeoisie like in Western capitalist nations. The gradual opening of the market (socialism with Chinese characteristics) has allowed the CPC to enact control on what happens with the growing bourgeoisie (and all the contradictions that they then have to manage as well). Meanwhile in the US, the bourgeoisie already exist and are incredibly bunkered-in.

It would be a disservice to the revolution to give them an inch. It’s the job of the US vanguard party to tear down everything, which not only benefits the working class of the US, but lifts the boot of imperialism around the world. The US controls so much internationally that the other Western nations would be scrambling to fill in the vacuum left in its wake, teetering the balance of power more in the favor of the international proletariat.

Ngl that show is an absolute riot. Nothing like sitting back and laughing at a bunch of white people who are dead-set in their view that aliens did everything incredible that humans have achieved.