Right now it looks like anarchist posts which don’t have anything to do with propaganda or other countries are also getting removed, which might just be cause they’re lost in the sauce of the brigade and all that? https://lemmygrad.ml/post/510

Since there wasn’t a rule about certain sources being banned beforehand, I “vote” the original posts should be reinstated and we hammer out what the rules are for future use. This was already an issue before this whole thing started.

Then there should be an actual rule against those sources in the sub, not just banning people ad-hoc for breaking an unspoken agreement.

I’m not one of the people brigading, just pointing it out. The articles were first removed before all this started.

I’m not agreeing with everyone else that just doing this automatically counts as homophobic, but the modlog is public. People can see what’s happening.

Why is it necessary to remove these articles?

This absolutely applies to just removing content for having a source that’s disliked, btw. Why not just comment that it’s a biased source and move on? It’s turning an opportunity for discussion into an unnecessary power play.

If this site really cares about opposing sectarianism and infighting and creating a leftist space, it shouldn’t make the same kind of mistakes people here often (rightly) criticize platforms like Raddle for. Wide-scale disagreement is one thing, but removing content that one personally disagrees wit…

Meet the Anarchists Making Their Own Medicine

Meet the Anarchists Making Their Own Medicine

@vendemiairetoCommunism•Why is this site pro-HK and other imperialists like the Kurd terrorists?
link
fedilink
4•3Y

There’s more detail on the Wikipedia page for the protests. Seems to be the same fundamental basis though.

link
fedilink
@vendemiairetoCommunism•Why is this site pro-HK and other imperialists like the Kurd terrorists?
link
fedilink
2•3Y

That doesn’t seem to be reflected in their demands:

What do imperialism and capitalism have to do with any of that?

@vendemiairetoCommunism•Why is this site pro-HK and other imperialists like the Kurd terrorists?
link
fedilink
4•
edit-2
3Y

agreed, that criticism looks weak compared to the other citations. thankfully this site is a hub of political tolerance which never censors memes or attacks people for holding slightly different beliefs!

Ken Cuccinelli, acting director of the agency, which handles legal immigration, said in a tweet the incident was “another example of the use of violence in place of debate by those who oppose the proper application of our immigration laws”.

Now that’s what I call praxis

link
fedilink
@vendemiairetoCommunism•Why is this site pro-HK and other imperialists like the Kurd terrorists?
link
fedilink
5•3Y

The reception there wasn’t exactly positive, though.

The “white genocide” crowd sure does, though they ultimately blame the Jews like they do with everything else.

You’re right, I guess wage and life expectancy stats cancel out the book bans, internet censorship, attacking unions, predatory lending to developing countries, propping up North Korea (and if you try and tell me they’re this maligned, misunderstood country I swear I’ll jump off a bridge lmao), etc.

Also, how is it disingenuous? I haven’t been dishonestly going “teehee they have no idea I’m critical of the conditions in China right now, little do they know muahaha!” Mike Pence and I share basically nothing in common, so idk where you’re going with that.

Ok? You can’t deny I haven’t been putting effort into Western issues, though. It only makes sense that China/HK is way more controversial on here.

My account shows my criticism isn’t just for China btw. Feel free to say all these things about me, but don’t try and tell me I’ve been pulling punches on the West. 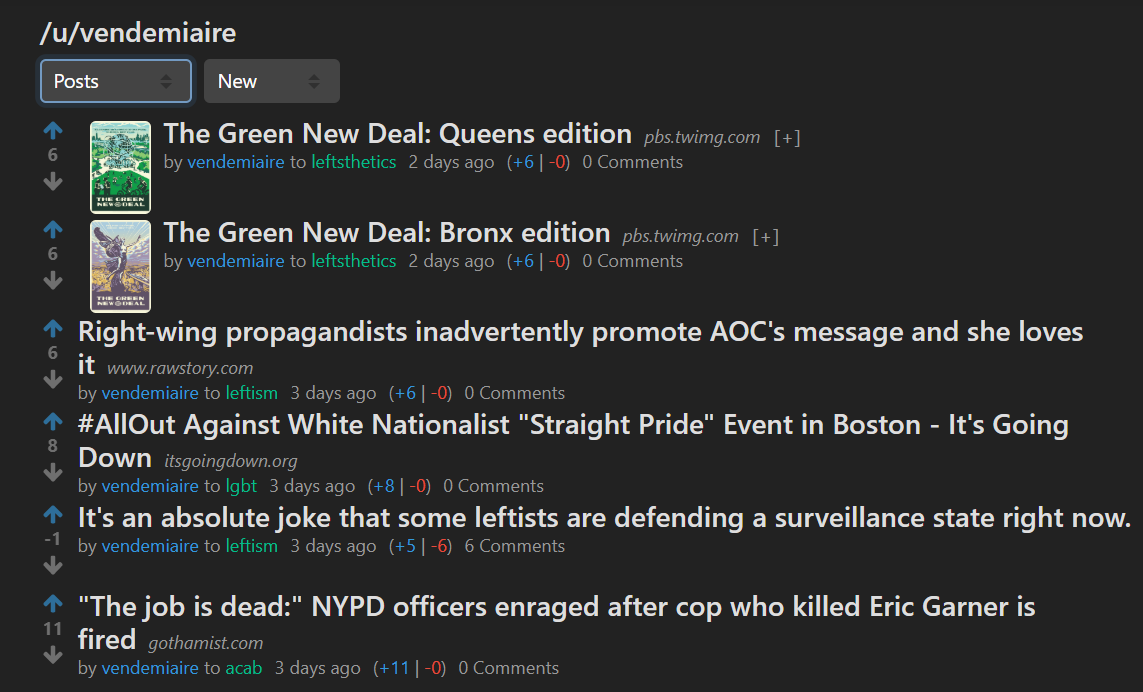 What makes you believe I don’t care about criticizing the West’s flaws? What ratio of Chinese to Western criticism would be acceptable? I agree that this is a communist space, so at least we have that belief in common. I literally never said “everyone in China is brainwashed,” what a ridiculous strawman. Criticizing a government isn’t the same as mocking the people under its system. Likewise, it isn’t xenophobia to point out that a government is flawed. Can there be open debate on this? I’m sincerely asking.

Agreed. The fact that some idiots coughcough will denounce them for building a new community which raises up women’s rights and democratic decision-making never ceases to amaze me.

Right-wing propagandists inadvertently promote AOC's message and she loves it

Right-wing propagandists inadvertently promote AOC's message and she loves it

It's an absolute joke that some leftists are defending a surveillance state right now.

Believe it or not, just because a government isn’t aligned with the United States doesn’t make it the hero in every situation. Oppressing and spying on your citizens destroys any claim of people’s liberation–full stop. Why is that so hard to grasp?..

It's an absolute joke that some leftists are defending a surveillance state right now.

"The job is dead:" NYPD officers enraged after cop who killed Eric Garner is fired

"The job is dead:" NYPD officers enraged after cop who killed Eric Garner is fired