I just learned of that movie’s existence and have been following the outrage up until now.

As I haven’t watched it, I really shouldn’t speak on this. But I do find it hypocritical how the right cries about cancel culture but then wants to cancel this film (you can’t make me believe even 10% of the people posting comments online have seen it).

For comrades who’ve seen it, what are your thoughts on it?

The posters for it in other countries are far less sexually implicative, so it seems like a lot of the outrage is specifically from Americans who haven’t seen it yet, and haven’t looked it up. 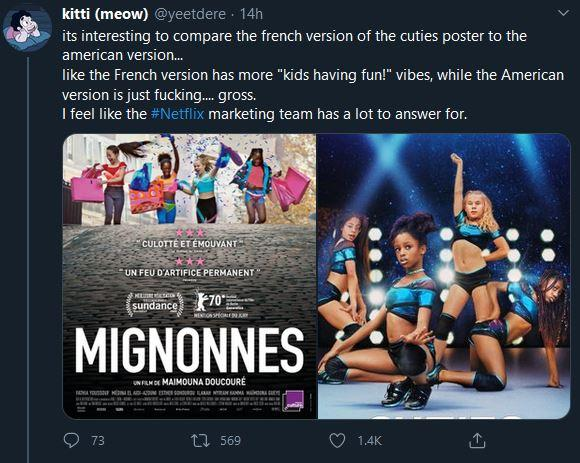 Really it should be said that anger should be delivered to Netflix, not to the film itself nor its director. At least, not until the film is seen and reviewers can talk about it. But, liberals just wanna be angry blindly, so it’s a bit much to ask them to look shit up before directing their anger.

The poster they chose and all signed off on was paedophile clickbait. They’re not the only corporation to facilitate the sexualisation children, there are people who share CP on Facebook and YouTube. I think it’s important to be conscious of the other incidents by other companies of how they are failing to protect children, instead of criticising Netflix’s advertising of Cuties in isolation.

I saw a screenshot of a complaint to YouTube on Twitter once, and they completely filled up the recommendation section with revealing pictures of children, all with thousands of views. I’ve seen other people report on r/YouTube that such videos end up in their recommended section.

The UK National Crime Agency has actually had to investigate big tech and draw up a report about this issue. I can’t find a copy of the document I saw them publish a while ago, but I remember it saying that the companies were doing nothing to stop this. They put forward a number of suggestions as to how they could stop or curtail the sharing of CSAM (Child Sexual Abuse Material) on social media, such as hashing the video wherever one is found and comparing new uploaded videos against the list of hashesine learning. The companies (such as Facebook) replied with excuses about “protecting the privacy of their users” which is an absolute fucking joke. Another suggestion was that they could archive CSAM on a server and use that to train a neural network to detect new CSAM. IIRC they said they couldn’t do that because the law prohibits storing that content, even though they literally already do host it for paedophiles to view. They also could easily ask governments to amend legislation to formally allow for this, wherever necessary. Of course they put all the responsibility down to the uploaders instead of themselves for hosting it.

Here is one article from the NCA about this.

There is a direct link between offenders viewing abuse material online and going on to sexually abuse children themselves.

And in just three clicks NCA investigators found abuse material via common search engines showing that there are no barriers to offending on the open web.

“There is no barrier to offending and that cannot continue.

“The sheer volume of child sexual abuse material available online creates a permissive environment for offenders to develop their sexual interest in children.

“The relative ease of entry into viewing abuse material can lead to incitement to actually abuse children.

So yeah. Guillotine for Zuckerberg.

Edit: The full report I was referencing.

I heard that the director of the film has received death threats over this and subsequently had to close her twitter account. Netflix really is cancer. Cancelled my subscription a while ago after having it for years. Can’t believe it took me so long.

What is it about? Child beauty pageants (spelling)?

It’s a coming of age story, where a girl wants to join a breakdancing group but has to reject your family’s traditions. (I haven’t seen it tho, and probably won’t be doing so)

At this point my brain is so capitalism poisoned that it seems like a.tactic for manufacturing outrage for advertising. (Reddit front page had a dude saying Netflix has gone too far.)