I think this is an excellent source because it is out of stanford using data provided to them by Meta and Twitter.

I have pulled out some parts I found notable and bolded the sentences that particularly sum up their importance/interest, so for the super quick version you can just look for the bolded parts. Note that I have not read the entire report yet.

The assets identified by Twitter and Meta created fake personas with GAN-generated faces, posed as independent media outlets, leveraged memes and short-form videos, attempted to start hashtag campaigns, and launched online petitions: all tactics observed in past operations by other actors. (p. 3) 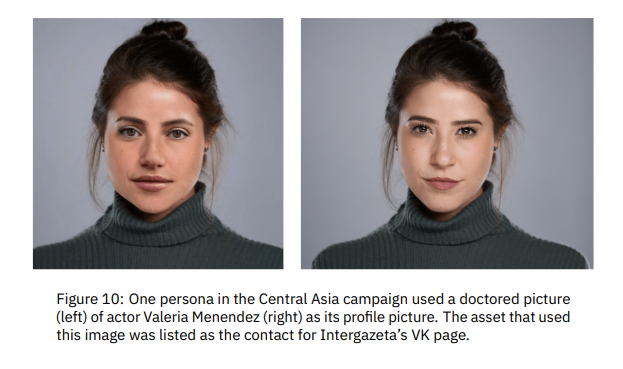 At least one of the group’s personas featured a doctored profile picture using a photo of Puerto Rican actor Valeria Menendez (Figure 10). We suspect that at least two other fake users in the group used similar techniques, but we could not identify the original photos. Additionally, at least one cross-platform persona used a picture stolen from a dating website (p. 12)

Activity in the Afghanistan group peaked during periods of strategic importance for the U.S., including the months prior to and following the signing of the Agreement for Bringing Peace to Afghanistan (U.S.–Taliban Deal) in February 2020 and the months leading up to the completed U.S. departure from Afghanistan in August 2021. (p. 7)

Assets in the group consistently portrayed Russia as a threat to Central Asian countries. A recurring narrative claimed that Russia is abusing Russian-Central Asian partnerships, namely the CSTO and, to a lesser extent, the Commonwealth of Independent States (CIS), to extract one-sided benefits (Figure 18). […] Other posts criticized Russia’s use of propaganda to spread anti-West and pro-Russia narratives in Central Asia, depicting Russia as a nefarious actor working to undermine independent democracies.

Anti-Russia narratives advanced by the campaign frequently cited Russia’s “imperialist wars” in Ukraine, the Middle East, and Africa. […] More broadly, assets in the group uniformly supported Ukraine, which they said was a country trying to free itself from Russia’s influence. Shortly after the invasion began in February, accounts promoted pro-Ukrainian protests in Central Asian countries. Later posts reported on evidence of atrocities committed by Russian troops and Russia’s block on Ukrainian grain exports.

A small cluster of assets within the Central Asia group focused almost exclusively on China. These accounts—a fake persona and sham media outlet—mainly focused on the genocide of Uighurs and Muslim minorities in “re-education” camps in Xinjiang. Posts described alleged organ trafficking, forced labor, sexual crimes against Muslim women, and suspicious disappearances of ethnic Muslims in Xinjiang. The assets also posted about the Chinese Communist Party’s (CCP) poor treatment of women in the country and often framed these stories around news about domestic violence. […] Other assets in the group also posted about China but asserted that Chinese authoritarianism and financial imperialism threatened Central Asia and other regions of the world. […] The group rebuked China for buying stolen Ukrainian grain from Russia and predicted that Moscow’s invasion of Ukraine would precipitate a Chinese invasion of Taiwan.

Accounts in the Iran group employed many of the same IO tactics we saw from the other groups, though with a few innovations. These assets included accounts claiming to be independent media outlets, shared U.S.-funded Persian-language media, had a low-engagement cross-platform presence, and showed low-effort spammy follow-back activity. […] The Iran group tried to engage with real Iranians on Twitter, often by joking with users about non-political internet memes. Accounts often replied to tweets with the face with tears of joy emoji.

The Twitter accounts in this group can be divided into those that criticized the Iranian government and a smaller number of accounts that shared hardliner views.

The Central Asia group focused on a range of topics: U.S. diplomatic and humanitarian efforts in the region, Russia’s alleged malign influence, Russian military interventions in the Middle East and Africa, and Chinese “imperialism” and treatment of Muslim minorities. Starting in February this year, assets that previously posted about Russian military activities in the Middle East and Africa pivoted towards the war in Ukraine, presenting the conflict as a threat to people in Central Asia. (p. 20)

Assets in the group heavily promoted narratives supportive of the U.S. on Facebook, Instagram, Twitter, YouTube, and Telegram. These posts primarily focused on U.S. support for Central Asian countries and their people, presenting Washington as a reliable economic partner that would curb the region’s dependence on Russia. Other posts argued that the U.S. was the main guarantor of Central Asia’s sovereignty against Russia, frequently citing the war in Ukraine as evidence of the Kremlin’s “imperial” ambitions. Interestingly, the assets also promoted U.S. humanitarian efforts, mentioning the United States Agency for International Development 94 times on Twitter and 384 times on Facebook in the respective datasets. (p. 20)

Assets still active on Odnoklassniki and VK provide insights into how this cross-platform campaign operated. Fake personas created by the actors were typically linked to one of 10 sham media outlets, which posed as independent news entities covering events in Central Asia. These fake personas posed as individuals living in Europe and Central Asia, were listed as administrators for the sham media outlets, and posted content from the campaign to different social media groups. (p. 11)

[T]he coordination was especially clear when assets in the group posted about U.S.-related news or used translated content from official American sources, such as U.S. embassies in Central Asia. In one example, the Vostochnaya Pravda Facebook page posted a word-for-word Russian translation of an English-language news bulletin from the U.S. embassy in Tajikistan (Figure 13 on the next page). The post included a link to a Radio Liberty article on the topic, an excerpt of which was then shared by multiple other assets in the group. (p. 15)

Around half of the assets posing as media entities, such as Stengazeta and Fakt Tobe, used batches of hashtags under their posts, likely in an attempt to reach broader audiences. […] Occasionally, the promoted hashtags were unrelated to the topic of the post. This was especially true for cultural content, which sometimes featured unrelated hashtags about the war in Ukraine. […] At least four of the sham media outlets also made apparent attempts to launch hashtag campaigns related to the war in Ukraine. (p. 18)

The assets pushed at least four petitions on Facebook, Twitter, and Instagram. One called for Kazakhstan to leave the Collective Security Treaty Organization (CSTO) and the Eurasian Economic Union (EEU). A second demanded that Kyrgyzstan curb Chinese influence in the country. The last two called on the Kazakh government to ban Russian TV channels. (p. 19)

archived version in case it gets deleted

I kind of want this to be a pinned resource or something like someone giving it a better title and pulling out the relevant excerpts to entice others to read it. It really proves all the shit communists are always saying the western governments/US are doing. This is the freaking playbook for online narrative manipulation, published by a western approved source, and it has gone completely under the radar (it’s been out for a month).

Like… this is massive imo. We all already know this but this is an underappreciated resource imo. It literally lays out how they incite color revolutions… and can socialize any topic they choose to, domestically. It literally says they create hardline/conservative posters for their liberal posters to rail against. This is something i have suspected for a long ass time. Controlled opposition. It’s literally all smoke and mirrors. And PR firms are making a lot of money for this stuff.

If someone reads this comment bump this post for visibility. Everyone on this site should read this.

Anyway, not sure when I will have time to look at this thoroughly, but I will look at it to some degree and pick out something to share.

This is a Dengist community in favor of Bashar al-Assad with no information that can lead to the arrest of Hillary Clinton, our fellow liberal and queen. This community is not ironic. We are Marxists-Leninists.

Coming soon to Element as well

No being an electoralist or a lib (of course)

This community is explicitly pro-AES