Why do some communists support Alex Jones?

Why do some communists support Alex Jones?

It’s not common, but I often will see ‘communists’ defend Alex Jones. They say he has done work ‘exposing global elites’. I have a feeling many of these types are patsocs.

What are your thoughts on this? Personally, I think encouraging your rabid fan base to harass parents of murdered children is unforgivable and should get the wall.

People like Alex Jones exist to flood public discourse with so many stupid conspiracy theories that credible ones end up getting avoided/disparaged by people who can’t afford the time/effort to filter out the bullshit.

I don’t know any that do.

Alex Jones is a clown. I’m not sure if he actually believes what says, but he sure did make a lot of money. His behavior is coming back to bite him in the ass and it’s great to watch. His own lawyer leaked the contents of his fucking phone lmao.

A part of me still wonders if he’s managed/an asset, but without any proof who knows?

Like most populism, alt-right populism draws on the unsettling feeling of a danger emanating from intransparent structures of government. This is a perfectly reasonable feeling to have, but whereas with all other forms of populism, the source of the danger is eventually (incorrectly) pinpointed and rallied against, alt-right populism instead thrives on making the danger appear unnecessarily diffuse and complicated by introducing false, irrelevant, or misleading elements and connections, creating a deep well of lore into which one has to throw massive amounts of time to even view parts of the picture, and thus increasingly preventing escape by virtue of the sunk-cost fallacy.

Meanwhile, precisely because alt-right populism explicitly does not concentrate on any issue, its followers are easily persuaded to participate in even violent protests for or against anything whatsoever, and can be convinced to buy all kinds of snake oil on the market, just as long some connection can be made to the amorphous blob labelled the enemy.

For the populist, the flip side of the bargain is that much like Pygmalion with Galatea, the storyteller eventually begins to fall in love with their creation and begins to believe in it themself, whilst the conspiracy theory itself comes to life and develops a dynamic increasingly beyond their influence; which in my opinion is exactly the case with Alex Jones, who I think is in need of psychiatric attention and has lost control of his own life. I don’t see him recline on a sofa after the show, serenely sipping brandy and setting up a chessboard as, say, a cold sociopath like Tucker Carlson might do; instead I am fully convinced that the same bouts of mania and grotesquery that drive his show also possess him in private, and that perhaps, he is himself the victim of some of the MLM schemes he peddles.

His stance on trots is great. That’s about it.

Alex Jones is a raving lunatic, but people in the US are so starved for any voices that go against the mainstream narrative that they will fall for anyone who says that things are not ok and that they’re not the only ones thinking something is seriously wrong and that they are being lied to by most of the media and politicians.

The task of the left is to provide an alternative narrative to these right wing reactionary types. And we have an advantage because while they only have racism, bigotry and conspiracy theories we have actual scientific analysis and systemic critique that do a much better job at explaining why things are the way they are.

And most importantly we offer real solutions. The reactionary right has none. They can rant about global elites all they want but at the end of the day they have no systemic alternative like we do with socialism, and when faced with contradictions between their world view and its negative consequences (such as mass shootings) they go into denial mode and double down.

Good points. This is why anti-communism is pushed so hard. The ruling class knows it’s the only solution to improve the lives of the masses.

Your feeling is likely correct. @cfgaussian@lemmygrad.ml has a great answer but I will just add that an excellent conspiracy historian Aaron Good characterized Alex Jones as “undiscerning and obscurantist” and I think that Alex Jones is deliberately so. He either is an asset or is managed - turned crazy/manipulated etc. by one imo.

BTW Infowars apparently had revenues around 300 million dollars last year- reactionary alt media rakes in the bucks from institutions and from their gullible audience.

Honestly? Sometimes I have wondered if these stereotypical conspiracy theorists are deliberately muddying the waters to make it more embarrassing to question the official narrative. It sounds like a satirical joke because of how meta it is, so I’ve never suggested it to anybody. From what I’ve heard from Robbie Martin, many people did find something particularly strange about 9/11 at the time of its occurrence, but the infamy of the clumsiest and crudest conspiracy theorists has generated guilt by association.

The term conspiracy theory itself was literally popularized by NYT:

In his 2013 book Conspiracy Theory in America, political scientist Lance deHaven-Smith suggested that the term entered everyday language in the United States after 1964, the year in which the Warren Commission published its findings on the Kennedy assassination, with The New York Times running five stories that year using the term.

Wikipedia has to be “neutral” and therefore they call this a conspiracy theory because, and I quote:

Michael Butter, a Professor of American Literary and Cultural History at the University of Tübingen, on the grounds that a CIA document which deHaven-Smith referenced, Concerning Criticism of the Warren Report, which was publicly released in 1976 after a Freedom of Information Act request, does not contain the phrase “conspiracy theory” in the singular, and only mentions “conspiracy theories”

I just got into Aaron’s podcast, American Exception. I want to read his book ASAP. I was introduced to him by the fantastic Ben Norton.

This is a good point. I remember Aaron mentioning this now. Painting the truth as a lunatic fringe conspiracy benefits the status quo.

We’re seeing this with Ukraine now. The MSM covered how it was Nazi infested up until recently. Now you are perceived as a nut if you mention this.

One thing that is particularly insidious about Jones and his ilk is that they’ve appropriated valid terms/concepts like the deep state and MSM from the left. I saw some MAGA types talking about color revolutions recently 🤦

I saw some MAGA types talking about color revolutions recently

Yep, there’s a section of the right atm that’s criticizing neocons, neoliberals, the US empire, the MIC, warm up to NK and think Taiwan is part of China. It’s incredible how close some of them are to getting it and how their analysis is somewhat materialist and dialetical in some regards, but then they also think Covid’s a hoax, climate change and LGBT struggles are empire propaganda, they still want to be patriotic and so on.

Yes exactly, they take a grain of truth, package it with lies and then when the lies are inevitably debunked people associate that truth with the lie and the topic becomes radio active among people who do not understand this nuance. Which is why I only speak about this kind of stuff with people who do lmao. Like the idea that the FBI is involved with school shootings or that the government was at least inactive wrt 9/11 etc are completely radioactive topics to bring up with your average person. Although on average i feel like americans are getting more conspiratorial, but they don’t have the media literacy to avoid the reactionary traps… like jewish conspiracies.

This is what they did with covid imo. The true conspiracy about covid is that the government is not acting when all the data says they ought to. by painting covid conspiracies as fringe they make it difficult for the average person to follow. They;ve unleashed the climate change denial playbook on covid.

but they don’t have the media literacy to avoid the reactionary traps… like jewish conspiracies.

Israel having exceptionally massive propaganda and lobbying arms that literally do try to help hide the truth doesn’t really help.

It’s so hard with Israel because they are legit terrible but then there are lots of anti-semetic people too.

It’s one thing to claim that he has, at some point, said something that most communists would agree with (if he has – I know very little about him except that he’s loud and obnoxious, he sells vastly overpriced supplements, and he claimed that some school shooting was fake). Even a rancid shit like Tucker Carlson has said some reasonable things (if only because he wants to contradict the “Democrats”). Defending/supporting these people is another thing entirely, and I can’t think of a situation where it’d be reasonable for a communist to do so

I saw some ‘Stalinist’ account defending Jones. It made my skin crawl.

Calling yourself a “Stalinist” rather than ML is a bit weird, too

I watch out for the people with Stalin pfps. I don’t know why, it’s just something I’ve noticed.

I was watching something today about neo Nazis in modern America, and no fucking joke, when showing some of their chat logs you have people unironically saying “both Hitler and Stalin did nothing wrong! The kulaks and Jews deserved it” and it’s like dude, what the fuck are you even saying? You have a few similar far right people praising the DPRK, basically take whatever the State Dept says about a leader and they believe the shit and think it’s good. Hilarious when liberals talk and think like kulaks is some ethnic minority.

What is it about stalin that makes liberals seethe so much.

He was successful in furthering socialism in Russia and also killed Nazis.

thank you, thank you very much 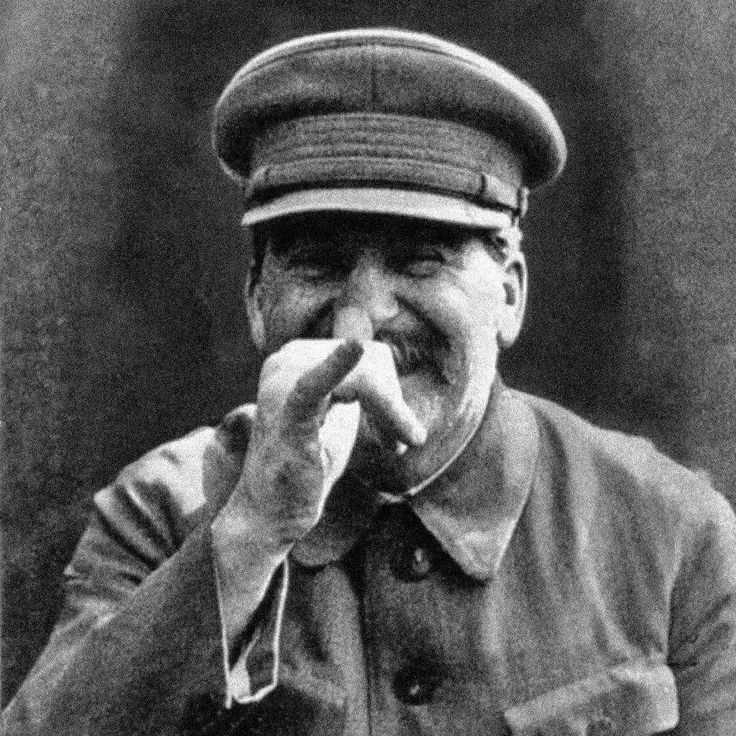