This is the state of the online left in private. When they are telling you that you’re an evil red fash and give bad optics to the left, remember this is what they act like in private. 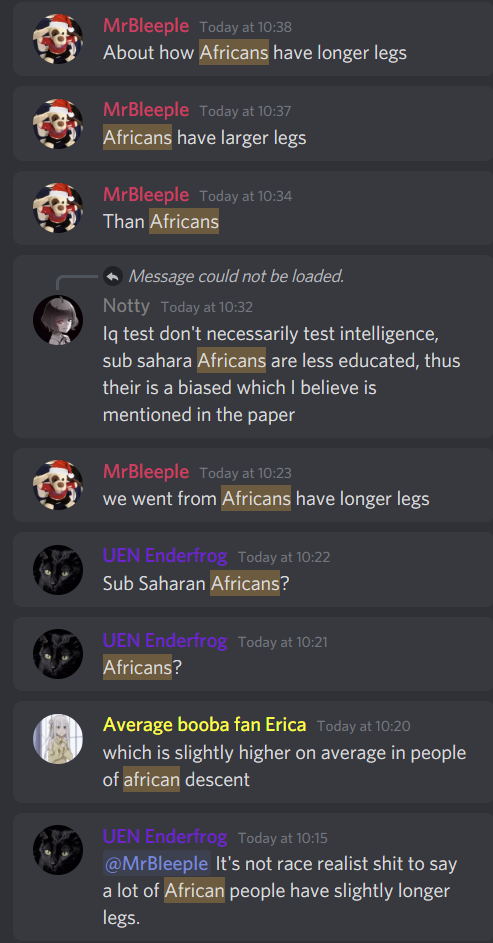 They also started talking about trans athletes, and when someone pointed out that there are women with too high testosterone (naturally, biologically) who were barred from competing, their answer was that these women take pills now to compete so it’s all good. Then they started talking about weight classes and said there should be race classes. Unfortunately I don’t have screens of this convo.

I wanted to share these pictures because as MLs we have to remember a few things from this.

I’ve gotten into the habit of searching common slurs when I join the places the ‘soft left’ (as I like to put them) tend to dwell. It’s surprising how many of these internet communities have rules like “no racism, sexism, or transphobia!”, then a simple search for racist, sexist, and transphobic terms and language turns up loads of results from long-term members of the community. Such as a discord chat I was in years ago for libertarian leftists who used the site Quora, which when I rejoined like a year or two ago after finding the invite in old private chats and did some rereading I found a looooot of racist jokes about jews and black people, and a lot of “the place of women” talk. It’s absolutely disgusting, and more common than I thought.

Hell, I just left the discord communities for leftists on Nationstates, and it seemed like ‘libertarian’ leftists just couldn’t stop shouting at “red fascists” for having a socially conservative history when it comes to the LGBTQIA+ community (which has and is changing rapidly, and isn’t really the ‘gotcha’ they think it is), but themselves couldn’t stop saying racist, sexist, and transphobic shit.

I’ve only ever been in one “authoritarian” online community that thought it was funny to use slurs and be hateful, but as it turns out, that community was full of brocialists, lifestylists, and nazbols. Literally every “authoritarian” community I’ve been in but that one has been dogmatic about fighting against hateful language of all kinds. Meanwhile, you have breadtubers like Contrapoints and Vaush who say transphobic and shitty things and the libertarians just soak it up like it’s the word of god himself. (clarifier; Contrapoints said some stuff that was shitty towards non-binary folk, Cis allies of the gender normity revolution, and transfolk who have trouble ‘passing’ and would prefer to be asked their pronouns to ensure people around them don’t misgender them, then she doubled down on it when the trans, non-binary, and Cis ally community pushed back against her, to which actual out in the open transphobes supported her stance.)

this is a long-winded way of saying; I really don’t like the libertarian left, and I’m rather done trying to keep myself from being sectarian about it. Far far far too often they’re just shitty western anti-communists who read Marx once but want to tell us all about how we’re the enemy, and we’re the ones who ruin revolutions, and we’re the reason the revolution in the west will never succeed, and we’re the idealists. Sure, there’s great libertarians, and there’s great non-marxist leftists of all stripes, I’m friends with a couple and I respect the fuck out of them, but libertarians really have to prove they’re not just coffee shop wifi using twitter liberals, who sip overpriced bean water while getting into flame wars with “red fascists” all day instead of being productive.

I have the same experience. Some years ago when I first got acquainted with breadtube and the likes, I observed that so many of these people who called themselves socialists though that because they were progressive, they were allowed to say bigoted stuff as a joke.

But being a socialist doesn’t allow you to say whatever you want.

Regarding the tankie communities, man, I’m in discords and stuff and you get “several people are typing” as soon as you say something out of line lol. As it should be, though sometimes it leads to an hour long struggle session and once you start knowing the people in your community, you also know who they are. Some people I know have said weird stuff but they speak English as a second language and didn’t necessarily realize what they were saying.

I’ve also found that anarchist communities ultimately end up doing the same things they accuse us of loving – purges, mass bans, eroding “democratic” processes (as if the way Reddit, discord, etc. are built allow for democratic processes to happen) in favour of “authoritarian” control… more than anything it’s funny.

Idk where lemmygrad stands today on its old rule of no infighting except in the two allowed communities, but I take it we’ve pretty much established lemmygrad as a space for Marxists and specifically MLs, and don’t care to play nice with other tendencies. So here’s the cool fact of the day: there are more MLs in the state of Kerala, India, than there are anarchists in the world. It’s an idealist ideology that has not produced one lasting example. So I’m not worried about the “libertarian left” at all. They yell at tankies meanwhile China is set to become the world’s first superpower. All of their examples of success lasted months, at best. So what do I care if some woke mutualist yells at me for being authoritarian and giving bad optics? They can’t do anything to me materially.

We floated it because we assumed this would be a space for multiple tendancies, but the pro-state libertarians didn’t really come, and the Anarchists pissed off to the main branch, and I guess they may have started their own instance. It still stands though, but now it’s more of a “those who believe Stalin was rad and those who don’t shouldn’t argue in c/communism” kinda thing.

of their examples of success lasted months, at best.

Anarchist and non-state communities tend to do well on the small scale, there are communes in the US and Europe that have operated pretty much the same for 50+ years, and people from these communes tend to believe their project is going well. However, every single time I’ve heard or read about an Anarchist project that was intended to be larger than the basic communes in economically well off places that tend to do well, it seems they last maybe a year or two, then they fizzle. I’ve extended my estimate to be as fair to them as possible, but they really don’t seem to be capable of holding their movements together, they always tend to either give into ‘warlord syndrome’, an authoritarian takes power and the movement shifts into an authoritarian ideology (which usually decreases the appeal of the project), or they just lose interest in progressing.

The only reasons movements like Antifascist Aktion remain popular through decades are;

I’ll give the libertarians credit for running communes without losing their hope, but there’s no credit do for leading anything close to a successful revolution. At least none I’m aware of.

I mean, if I didn’t believe communism could work, I wouldn’t be one. The theory is sound and communes work, but I don’t believe that buying property to install your private or semi-private commune on it is anything like socialism. I was recently told of Christiana in Denmark for example, and after years of going through controversy after controversy, they decided to buy the land piece by piece (at a preferential rate from the government) so they could finally resolve the gray legal area they were in. Now they’re just private property and can do whatever they want on their land within the bounds of Danish law.

In their early days, the Hells Angels controlled the drug trade which until 2016 was their whole economy basically. You could go down the main avenue and buy all the weed you wanted from the stalls that were there 24/7. Though it was always limited to cannabis, they banned hard drugs. A few people died from it (from gang wars or police intervention) and that’s why they decided to stop selling drugs altogether. I would have to see Christiana myself to get a definitive idea but from my reading it seems very much like a petty bourgeois “you can’t tell me what to do” dream. A big debate the commune faced was about the use of cars; since it’s right in the middle of the city, cars used to drive through all the time without living there and that was bothering the residents.

Likewise the big example the libleft likes to point out, Mondragon Corp, is a federation of corporations (so I’m not sure how much of a worker’s coop it is, they federate other corps under their name) and liblefts like to say it’s the biggest worker coop in the world. But Huawei is actually the world’s biggest worker coop - they have 2.5x as many employees as Mondragon does. Although from Huawei’s website they say only 96k of their employees are share-owners, that still gives them more share-owning employees than Mondragon as well as a bigger revenue and areas served. There may even be a bigger coop than Huawei in China so, who knows.

For all their talks of optics (appearing better than fascists), it is clear they don’t care about any of it. To them good optics is letting everyone do and say whatever because it’s their personal freedom.

I think thats exactly it, they only care about appearance, but without any critical introspection of their own biases.

It’s not race realist shit to say a lot of …

Thats some gross shit. Reminds me of when the chapos / dirtbags were on a really transphobic and racist turn. Sad to see some of the most popular “leftists” using scientific racism from the 1800s.

This is what class essentialism ultimately leads to… and they’re not without predecessors, like the US SPA party that excluded asians and latinos.

There is no theory that can be absorbed from these “responding to prageru” videos.

That is really annoying to see… I think it’s called tailism? To a certain extent it’s unavoidable because capitalists are in power… but communists should be the ones setting the talking points.