Mao Tse-Tung once warned us, at the beginning of the Great Proletarian Cultural Revolution that the Communist Party of China had to be vigilant against revisionism, because, he said, it is possible for a Party to become fascist almost overnight. While being confused and confusing on many other matters, he couldn’t have been more right on this one. Ask his wife.

Since the crushing of the GPCR with Mao’s help China has been ruled by fascism. We’ve already explained our views on Mao, his wife, and her cohorts. They were “centrists” who tried to straddle the class struggle and are now, with the defeat of the left, being cleaned out by the right.

Mrs. Mao and Co. will never be heard from (unless her crowd stages a counter-coup). She will never get a trial. Most likely she won’t even be seen again. From one end of the world to the other this is thought to be “normal”. It is an outrage! It is fascist! It has nothing to do with Communism; with respect for the views of workers, respect for their right to consider and to decide.

Instead we get these obscene parades pushed along by the army (the one James Schlesinger is lining up to serve U.S. imperialism in a future war with the Russian imperialists). The paraders have to carry signs saying X is evil, when yesterday the same paraders were carrying signs saying X was good.

Compare this brutal cynicism to Bolshevik practice. Following the revolution, certain “socialist” parties engaged in sabotage against Lenin’s Party. They were arrested and put on trial; the first of what the class enemy called “show trials”. When foreign friends of the defendants complained of the arrests, they were invited to attend the trials and even allowed to help with the defence. But, Lenin warned, the guilty will be executed. The accused could stand up and explain themselves. This gave the masses confidence in their government.

At the death of Lenin in 1924 Trotsky made a move to take over and was blocked but he was allowed to squirm and struggle for another two years and workers and Party members examined and repudiated his rotten “programme”. Stalin, among others guaranteed his right to struggle.

When the Trotskyites abandoned open “comradely” tactics and began to take the road of disruption and sabotage they too were arrested—AND PUT ON TRIAL. Workers’ delegations and journalists from all over the world attended the trials. This was a triumph for Communist ideology—for the concept of relying on the working class.

The capitalists of the world hated those trials and have howled about them ever since, whereas, today, they passively repeat as fact little pre-fabricated tidbits thrown to them by the fascist generals of China.

This has been a galling question for years. The Chinese Party was never exemplary on the treatment of oppositionists. Yet, paradoxically, pipe-sucking liberals and professional “experts” have been lecturing us about Mao’s more “open” methods of handling differences. Baloney! Liu Shao-chi we were told was a monster (after nearly 30 years of leadership). Liu was never permitted to answer a single charge. Liu Piao was a Russian agent and out to kill Mao. Not a peep from Liu. Teng Tsiao-ping was an ornery something or other. No chance to reply for Teng. Now it’s Mrs. Mao who (according to straight faced Ross Munro in the Globe and Mail) tried to kill Mao as he lay dying! Really, comrades, as he was dying? What’s the rush? This is a pack of gangsters, and yet some act as though it is only political “line” that’s involved.

We shouldn’t be vague about this at all. A Party that won’t take its case to the masses, that won’t hear evidence or argument, especially from the most "prominent figures, may as well fold up its pretensions to Leninist principles and study the thought of the Godfather.

Hua Kuo-feng, the fascist boss of China, has been erroneously called a “centrist” or “moderate”, and some describe him as an unknown. 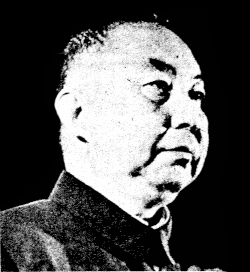 But the Red Guards of the Great Proletarian Cultural Revolution of the mid-sixties knew him well . . . and hated him. We can see what the revolutionaries thought of Hua in the following quotes taken from a Red Guard document titled, “Whither China?”

The “Red” capitalist class gained an almost overwhelming ascendancy in February and March (1967). The property (of means of production) and power were wrested away from the hands of the revolutionary people and returned to the bureaucrats. In early spring, in February, Lung Shu-chin, Liu Tzu-yun, Chang Po-shen, Hua Kuo-feng, and bureaucrats throughout the country and their agents at the Center, wielded unlimited power. It was their heyday, while the power of the revolutionary people dropped to zero. Moreover, large numbers of revolutionary people were thrown into prison by the state organ — public security, procuracy, and judicial organs — controlled by the capitalist class.

For a short time, the cities were in a state of “armed mass dictatorship.” The power in most of the industries, commerce, communication, and urban administration were again taken away from Chang Po-shen, Hua Kuo-feng, Lung Shu-chin, Liu Tzu-yun and their like and put into the hand of the revolutionary people. Never before had the revolutionary people appeared on the stage of history in the role of masters of world history as they did in August. Primary students voluntarily did the work of communications and security. Their brave gestures in directing traffic, and the pride with which “Storm Over Hsiang River,” “Red Middle Committee” and other mass organizations directly exercised some of the financial-economic powers, left an unforgettable impression with the people.

Could you explain in what way China fits the definition of fascism? Making that claim is easy, but I dont see any supporting arguments to reach that conclusion.

In general I dont find your texts convincing at all, an I’m wondering why you are joining in on the US governemnts anti-China crusade with these posts.

I’ve only heard the claim that modern China is ‘Fascist’ by the pseudo-leftwing in Hong Kong, and by Maoists in the first world. I suspect this is a western Maoist publication, so I defacto assume it’s run by either a US-backed organization, or revisionists.

I like to give the benefit of the doubt, but this is very suspicious.

I would normally give the benefit of the doubt, and I intended to give it to this org at first. But After looking at their site and seeing the posts by this poster, it’s blatantly just ‘neither Washington nor Beijing’ level of revisionist ‘holier than thou’ Maoist orthodoxy, and I just can’t find an argument within myself to not just see this as anti-china bullshit.

This doesn’t really prove anything, I’ll acknowledge that, but their site explains what they’re about, but doesn’t provide an ideology. Instead, they spend quite a while trying to accuse China of being state capitalist and trying to convince the reader that supporting China is hypocritical to the revolution. I, personally, have only noticed this on western-backed org sites. Like the one that’s supposedly an Iraqi anti-sectarian group, that claimed the militia that’s linked to the Communist party of Iraq are the “new ISIS” for warning people about ISIS threats and standing guard in a city that ISIS threatened, but the anti-sectarian group was backed by a Libertarian Marxist group in like Belgium.

The section directly above quotes part of a first-hand account of the counter-revolution. (See the full Whither China? (1968) (p. 1 summarizes) and Khrushchev’s Phony Communism (1964), the last “by Mao himself” according to Part 1, to address your questions.) The Trotskyism and Maoism comparisons were already broadly addressed. These two articles plus PLP’s analysis of the problem of the 1935 7th Congress of the Comintern (see p. 18) (it massively contributed to fascist victories) is likely a major reason for not adopting a “lesser evil” approach, since this strategy would be even less successful from a weaker position. (No doubt PLP neglected to ask the opposition which way they were leaning.) One interesting detail is that Stalin seems to have disapproved of the “lesser evil” strategy:

The anti-communist historian Medvedev (see article on “Stalinism,” this issue) claims to have evidence that Stalin never agreed with the outcome of the 7th Congress. This may be correct since although it is true that Stalin never publicly expressed disagreement, it is also a fact that he was not present at the proceedings of the 7th Congress. This absence was extraordinary and inexplicable otherwise. [p. 47] [The “Stalinism” article (unavailable online?) likely refers the point made at p. 58: “great man” theory, crude anti-communism, etc.]

Can anyone really read any of this and claim there’s a lack of materialist analysis? For instance, the Mao piece above is particularly chock-full of it. Disagreement is fine if at some point there’s an evidentiary reason for it, but we’ve had sources like that and Whither China? for 50 years. Preferred narratives are often constructed for the left by just not mentioning contradictory evidence.

For an overview of fascism, see China’s Foreign Policy: Alliance with U.S. Imperialism on p. 12.

A community created to explore the views of the Progressive Labor Party. All responses are welcome.

The moderator is not a PLP member.

PLP Glossary (to be updated)

Rules to be adapted from PLP.org when found.

Who can be involved?

“Our Party’s experience in the mass movement shows that a growing number of workers, soldiers and students are looking for a way out of capitalism’s house of horrors…” (Dark Night, 2015)